Technology of the Year Film is No Slipup.

The Association of Industrial Metallizers, Coaters and Laminators (AIMCAL) honored MTI Polyexe, Brentwood, New Hampshire, with its Technology of the Year Award for its Anti-Skid Film at a banquet on Thursday, March 15th during its March Management Meeting, March 14-18, 2007, at the Hyatt Regency Lost Pines Resort in Austin, Texas. Proprietary chemicals added during the extrusion process result in a blown film with a rough surface for building and construction applications. Ultraviolet (UV) barrier additives enhance weather resistance of the material, which is designed to become an integral part of the building rather than a disposable item. The rough-textured material not only permits safe walking in wet conditions, especially on roofs, but also protects the underlying structure from weather until final roofing materials are applied. Unlike most competing materials, MTI Polyexe's Anti-Skid Film is produced in one pass and provides better UV protection and coefficient of friction at a lower cost. It exhibits good strength properties, anchors to a wide variety of substances, and can be laminated to virtually any substrate. It also can be made in an unlimited number of colors. In addition to roofing and other construction applications, Anti-Skid Film currently is used by manufacturing companies around equipment where improved footing or traction is needed and to provide cushioning for workers who must stand for long periods. Future applications include sporting equipment and ladders where better traction or gripping action is needed.

The judges were completely intrigued by the Anti-Skid Film and liked the fact that it eliminates the grit typically used in roofing films and other non-skid surfaces. They also were excited about its potential for widespread use far beyond its initial applications in building and construction especially if it costs less than competing materials. "We see all sorts of applications -- from icy steps to slippery boat decks," they concluded. 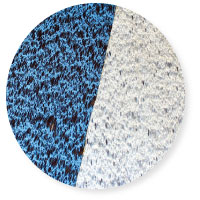 For more information about AIMCAL PFFC, please consult the

For more information about AIMCALL PFFC, please consult the Links